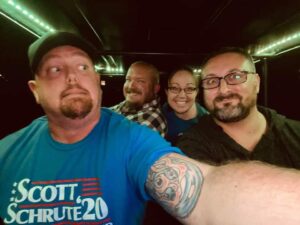 One rainy summer night in 2019, local t-shirt making, cross country running Titusville socialite Scott Geiser was inspired by several popular local podcasts. Friend and previous co-host Stan pushed to make it happen and Scott did just that.  Stan & Scott recruited Jared and Karissa and we were blasting off into pod-world!   After a few episodes our biggest fan at the time Mattie decided she was going to show up at Scott’s and be on the show too.

Around 60 episodes in Jared & Stan couldn’t handle working AND podcasting with Scott so they went on to be world famous Twitter trolls and Orlando Magic fan boys.

Scott, lonely and watching re-runs of Mr. Rodgers Neighborhood episodes, had an epiphany. He decided to call the greatest person he knows, Charley Lord, a professional asshole, avid old guy jogger, a grown ass man who collects vintage Star Wars toys and magic was made.

However, there was still something missing. That something was Joe Miller, our own local male model and Miller Lite beer brand connoisseur, who stepped in and eagerly became our third wheel. After some time passed he quit to focus on his Crocs sandal modeling career.

Luckily after guesting in on an episode, local craft beer queen, Dave Grohl stalker and all around great person Colleen Comerford decided to join us on our podcasting journey!

Then, the skies parted and we were gifted the most interesting man in Brevard County, plant loving, space guru, and who many consider the ‘Elon Musk’ of Titusville – The Milky Way Mandingo – Chris Chamberland.

Join us while we talk about local and national news, pop culture, and our crazy lives. Although, the conversation usually ends up on food.